Guide to Toronto's Cannabis and Accessories

Even if you have never heard of the term, you’re most likely doing it without knowing! Every time you light a joint or bake brownies you’re doing some level of decarboxylation on the fly!

Decarboxylation is simply a chemical reaction that removes a carboxyl group (C(=O)OH) and releases carbon dioxide!

Why do we Decarboxylate Cannabis?

Most of the Cannabinoids are stored in their Acid forms in the raw cannabis plant. Most importantly the plant contains Cannabidolic Acid (CBD-A) and Tetrahydrocannabonolic Acid (THC-A) which both have powerful medical properties of their own but they are non-psychoactive, meaning they don’t make you high if consumed. That’s why you won’t feel the effects if you eat raw cannabis plant/buds. However when heated above certain temperature, these acids lose carbon atoms to become THC and CBD which are psychoactive.

Do I need to Decarboxylate my Cannabis?

If cannabis is consumed for the healing power of THC-A and CBD-A, then no! If the psychoactive effects are desired, then it depends on how you’re consuming cannabis. In case of smoking and vaping, decarboxylation process happens during the consumption. Cooking and baking with cannabis also stimulate decarboxylation as well. It’s just if you’re going to consume raw cannabis or dissolve it or its extract in a solvent and make some sort of tincture without using enough heat then you’ll need to decarboxylate to bring out the psychoactive effects.

How can I Decarboxylate my Cannabis?

In theory it’s easy. Just heating the raw plant would do the work except it also degrades and oxidizes the very same material we’re trying to make. In practice, it’s also easy we just have to be a bit precise in the temperature and time! I’ve seen and tried many different numbers on the internet but I find the following the most accurate: 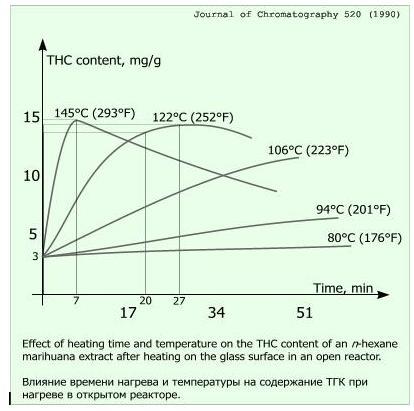 The best results I’ve had in maximizing decarboxylation while minimizing the oxidation was to try to keep products at 122c (252f) for 27 minutes. The easiest way to achieve this is to use oven for this purpose but that’s also the least precise. (Check out The best way to decarboxylate cannabis at home.)

Although Cannabis and its use have roots in ancient times, its legal status through recent times have kept it from reaching its true potential. There haven’t been nearly as much experiments done on it as a substance with such properties and popularity. The bad news is that not much information is out there, especially when it comes to less common methods. The good news is that you can experiment and find out the answers first hand!

I wish I knew the term Decarboxylation 10 years ago when I first tried experimenting on weed using different substances. I now understand that a lot of my failed attempts were in fact successful in dissolving Cannabinoids! Just not the activated kind 🙂

The different ways to consume cannabis

CannabisToronto is an affiliate based website which means we do not directly sell or distribute marijuana or marijuana products. At no extra cost to you, we may get a commission from your purchases. Any issues related to the purchase or shipping of your order must be discussed directly with the distributor purchased from. CannabisToronto is not liable for any order issues.